The aim of the rehabilitation is get the child to be able to walk (either independently or with assistance) or in other words, to be able to control their muscles despite the spasticity. However, even if we succeed (…), we are aware that spasticity will cause pain and bone deformities (mainly deformities of the feet and hips) during growth bursts because the bones are going to grow with contracted muscles. The child will have to fight against spasticity all his/her life. So it is important to list all the existing surgical interventions possible.

Find our testimony about Selective Dorsal Rhizotomy at the end of this page!

A gait analysis consists in capturing a video of the patient movements while he/she is moving with or without support (crutches, walker). The patient wears reflective captors which allow to detect anomalies in the gait. The patient also wears electrical captors on key muscles to follow their activities (contraction and release), and understand why anomalies appear in the gait. A gait analysis is often done on children with Cerebral Palsy in order to better know in which muscles Botox injections should be done, or to have a pre or post-surgery measurements and records.

This article underlines the fact that surgeons’ conclusions are not the same before and after this gait analysis!

Yes, the Botulinum toxin A has other applications than the reduction of wrinkles!

When injected in a muscle, the toxin links to nerve endings and paralyzes them. With time, neurotransmission resumes once new nerve endings are developed and form new contacts with the muscle fibers. The effect usually lasts for 3 to 6 months. Botox injections allow the muscles to relax, which creates a window of opportunity during which muscles can grow or other treatments can be used to help stretch the muscles and increase their mobility.

In children, this intervention is done under general anesthetic. The points in which the injections should be done have to be rigorously selected in order to free the child’s movements without weakening him/her.

For children, orthopedic surgery has 3 objectives: avoid bone deformities, ease movements and improve the gait. The orthopedic surgeon intervenes either on the bones or on the muscles and tendons. In any case, one has to consider how much growth the child has left. Indeed, if a surgical intervention is done when the child is too young, the risk of needing a repeat surgery is high!

In recent years, an increasing number of families who have children with Cerebral Palsy are travelling abroad from France to get Selective Percutaneous Myofascial Lengthening (SPML) surgery. In this surgery, incisions are made at different points in the muscle fascia (fibrous membrane which envelops the muscle) in order to reduce the tension of the muscle.

To understand the SPML better, let us have a look at the acronym:

Why isn’t this surgery done in France?

It is done, but not “percutaneously”!

SPML does not leave scars while the surgery done in France needs incisions which cause small scars. However, French surgeons do it knowledgably because they prefer the precision of this type of surgery: “We do not perform any tenotomy percutaneously because this does not allow to fully control the extend of the sections and leads to a higher risk of over-sectioning». Extract from the book “Marche pathologique de l’enfant paralysé cérébral (pathological gait of children with cerebral palsy)” by Pr. G.F. Penneçot (ISBN 978-2840236443).

Moreover, French surgeons tend to favor what they call “multi-sites” surgeries (meaning they treat different anomalies at the same time), as they do not want to do surgery just for a “fasciotomy”.

In this context, SPML is the preferred choice of numerous families as the results they observe are:

Depending on the parts of the body treated, SPML can have an effect on the hands, arms, legs, jaws, eyes….

Important point to know: SPML surgery does not eliminate spasticity, but it can eliminate the soft tissue retractions which result from spasticity. The surgical intervention does not have permanent and definitive results because of the child’s growth. Being «non-invasive» is also reassuring. It doesn’t not mean that it’s a mere surgery because a bad selection of the fibers to section can result in the complete collapse of the arch of the foot for example.

The association « un sourire pour l’Espoir » organizes consultations with Dr Nazarov in Paris on a regular basis. But a growing number of families get a second opinion before going further because opinions are often contradictory if there are no retractions yet.

Amongst all the possible neurosurgeries (neurotomy, drezotomy, rhizotomy, etc.), there is no doubt that the Selective Dorsal Rhizotomy (SDR) is the surgery which has had the greatest progress. It aims to reduce muscle spasticity by reducing the abnormal nervous input coming from the muscles to the brain.

The basic technique used is not recent but its use in the treatment of children affected by Cerebral Palsy is growing in the Anglo-Saxon world. Two completely different schools co-exist: 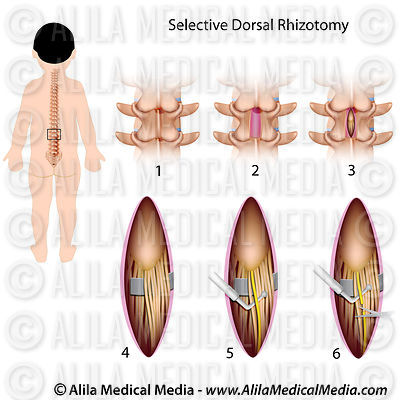 By eliminating spasticity, an SDR surgery done at a young age limits the apparition of orthopedic deformations and increases the child’s chances to acquire a gait as close as possible to a normal gait.

SDR surgery eliminates most of the spasticity permanently (it does not return). However, it does not have any effect on the soft tissue shortenings that might be already present. SDR does not address dystonia (uncontrolled movements) either.

The results of SDR are impressive and lots of testimonies can be found (here are just a few examples):

The world specialist of the SDR surgery is Dr T.S. Park, in Saint Louis Children’s Hospital (SLCH), Saint Louis, Missouri, USA. Dr Park has developed a less invasive “single level” technique which makes it different from other techniques. With this single level technique, only one vertebra is opened (instead of 3 or 4 in the multi-level technique), reducing the risk of developing scoliosis post-surgery. To date, Dr Park has performed SDR on over 3,400 children in almost over 30 years. Only 4 children had complications (non-permanent).

SDR cannot do anything for dystonia.

Candidates for this operation are those with spastic diplegia whose legs and core are rather strong. Ideally, they need to be able to crawl on all fours and walk a few steps with or without support. Moreover, the patient and his/her family must be hugely motivated, especially in order to follow the post-surgery rehabilitation program. The rehabilitation program is key to the success for the surgery. It is a difficult period during which the patient must do physiotherapy on a daily basis (sometimes several hours a day) and during which it is sometimes difficult to see any tangible results despite the efforts put into it. However, do read our testimony at the bottom of this page: the work is worth it!

Finally, this surgery is a substantial financial investment ($45,000 in St Louis, Missouri, USA. This includes the SDR surgery, 3 weeks of post-surgery physiotherapy, 1 hour a day, 5 days a week, as well as a $6,000 refundable deposit for equipment that the patient may or may not need).

Testimonies from families seem unanimous (look at the Facebook group called Selective Dorsal Rhizotomy – St. Louis Children’s Hospital » where parents post videos of the “before” and “after” SDR).

SDR is starting to be more available in Europe:

Procedures to send your application to the USA or Germany (the waiting lists for the UK seem to be extremely long):

As families come from all over the world, St Louis Hospital has set up a pre-selection process to assess patients (you need to send an MRI of the brain (only if the patient was not premature), X-rays of the spine and hips, and videos of different postures and various exercises the child can do). There is a contact form in the second last paragraph entitled “Video reviews to assess patient’s candidacy” on this page: http://www.stlouischildrens.org/our-services/center-cerebral-palsy-spasticity/patient-selection

To be a candidate in Germany, send Dr Haberl a video of your child as well as spine and hip X-rays. 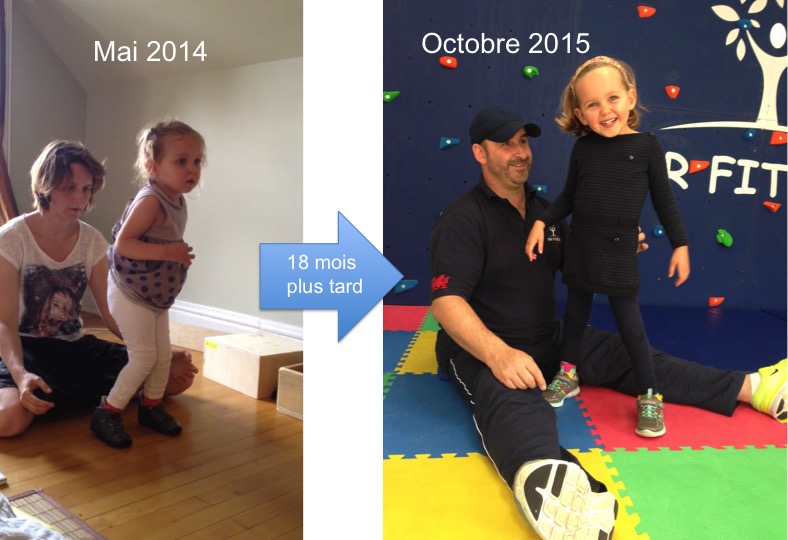 And if you need testimonies to be convinced …

What did Enora say the day after her surgery? “My legs don’t hurt anymore” even though she had never complained before… all she had known so far was pain!

The results are amazing: her spasticity is totally gone, as well as her clonus and equinus. Her legs are straight and are as supple as a normal, non-spastic child. Her speech has improved (recognized secondary effect), she does not sit in a W systematically anymore, she is less emotive and is feels better in her body. She has a faster and more fluid gait.

SDR does not solve all the problems as the brain is not fixed, but what a pleasure to see Enora being able to stand with her feet flat on the ground! And thanks to the SDR surgery, our daughter can also grab her feet and take her socks off herself!

Enora T. was also operated in July 2016. Her testimony mentions an increase of the daily comfort with no contest and a big step in the displacements.

Families also report that the surgery also benefited the upper limbs of the spastic quadriplegic children.

For those who are considering this surgery for their young child, we made a book with the help a psychologist to prepare for SDR. You will find it here.