Orthopaedic devices are mainly used to:

Depending on what they are used for, these devices can be static or dynamic, soft or rigid.

The solutions covered here are: 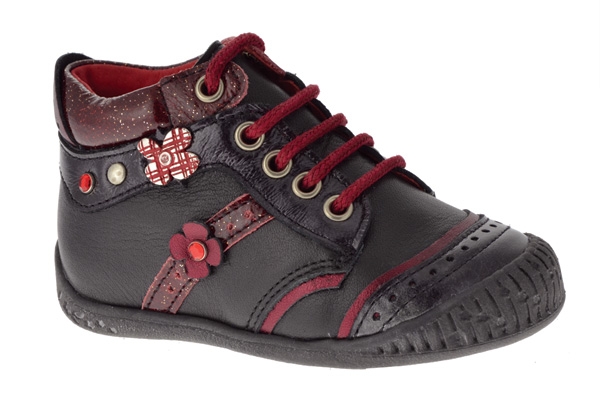 Despite buying good shoes, they tended to wear down after two to three weeks.

« Loup Blanc » make shoes are almost orthopaedic shoes… but not quite. They are designed to look like « normal » shoes, so although they have corrective features on the inside, you can’t tell from the outside. This means that they offer extra support around the back seam, but they still look stylish!

Despite having good shoes, Enora A.’s feet and knees still turned and collapsed inwards. Basic orthopaedic insoles did not help and we were concerned that her bones could become deformed. These heel braces have really helped to correct her stance. They hold the calcaneus (heel bone) in place and support the arch of her foot to prevent it falling inwards. There are different types of heel brace, but they all serve the same purpose (see pictures below).

More generally, have a look at Cascade’s guide to brace selection which is excellent. You can download it here. 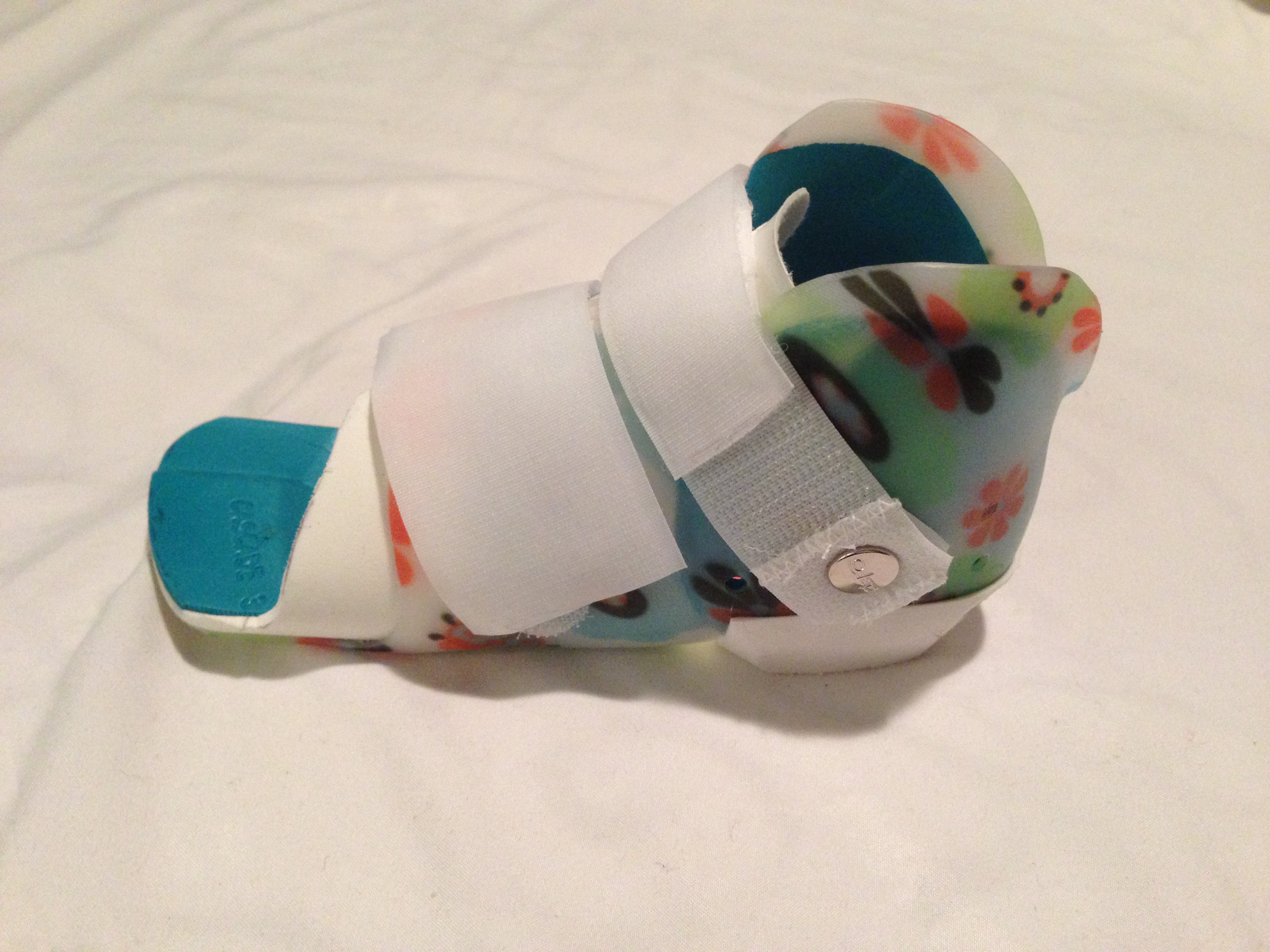 This is normally used by adults, and not many healthcare professionals know that they are available for children!

This device is designed to help the child to walk by lifting the foot so they can initiate the movement from the heel rather than the toes. But we believe it provides an extra benefit, because it holds the muscle in a permanently stretched position. This gives Enora A. more stability because she can stand up against a table with her feet « almost flat ».

This is the first static model that Enora A. tested. 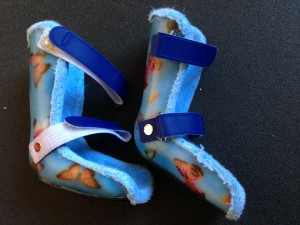 We initially gave up on night splints because we could see that her muscles were fighting against the equinus distortion during the night. The straps left big red marks.

In the end, we opted for these dynamic orthoses, i.e. these articulated splints which allow a certain degree of rotation. To complete the stretch position, they are worn with a knee splint which immobilizes the knee.

Of course, it breaks our heart to have to use this, but we can see that they really work. But because it’s a little bit « barbaric » and, more importantly, hard to sleep with, this is what we do: we only use it on one leg each night (swapping legs every night). The first few nights are hard, but if used regularly then it is tolerated quite well. 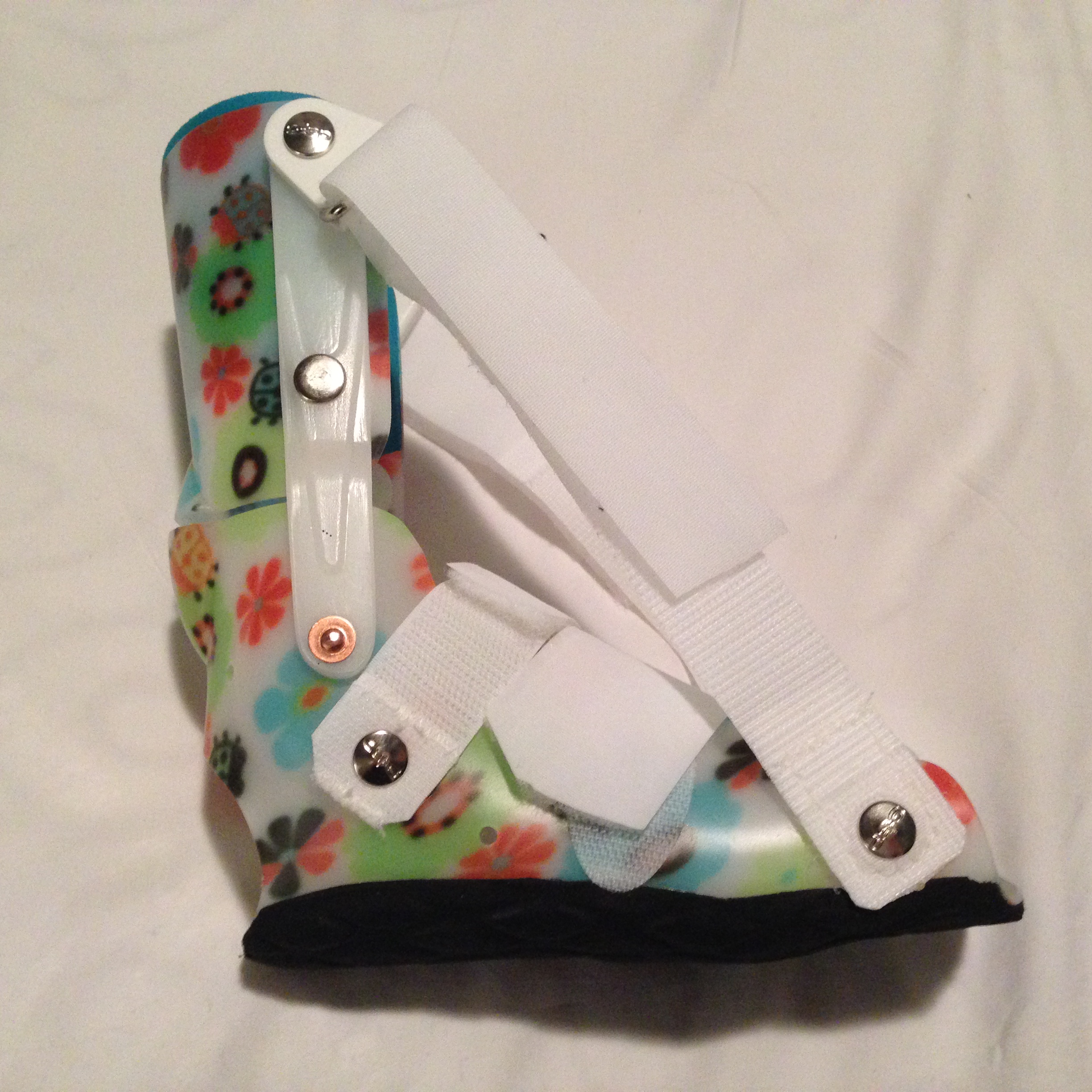 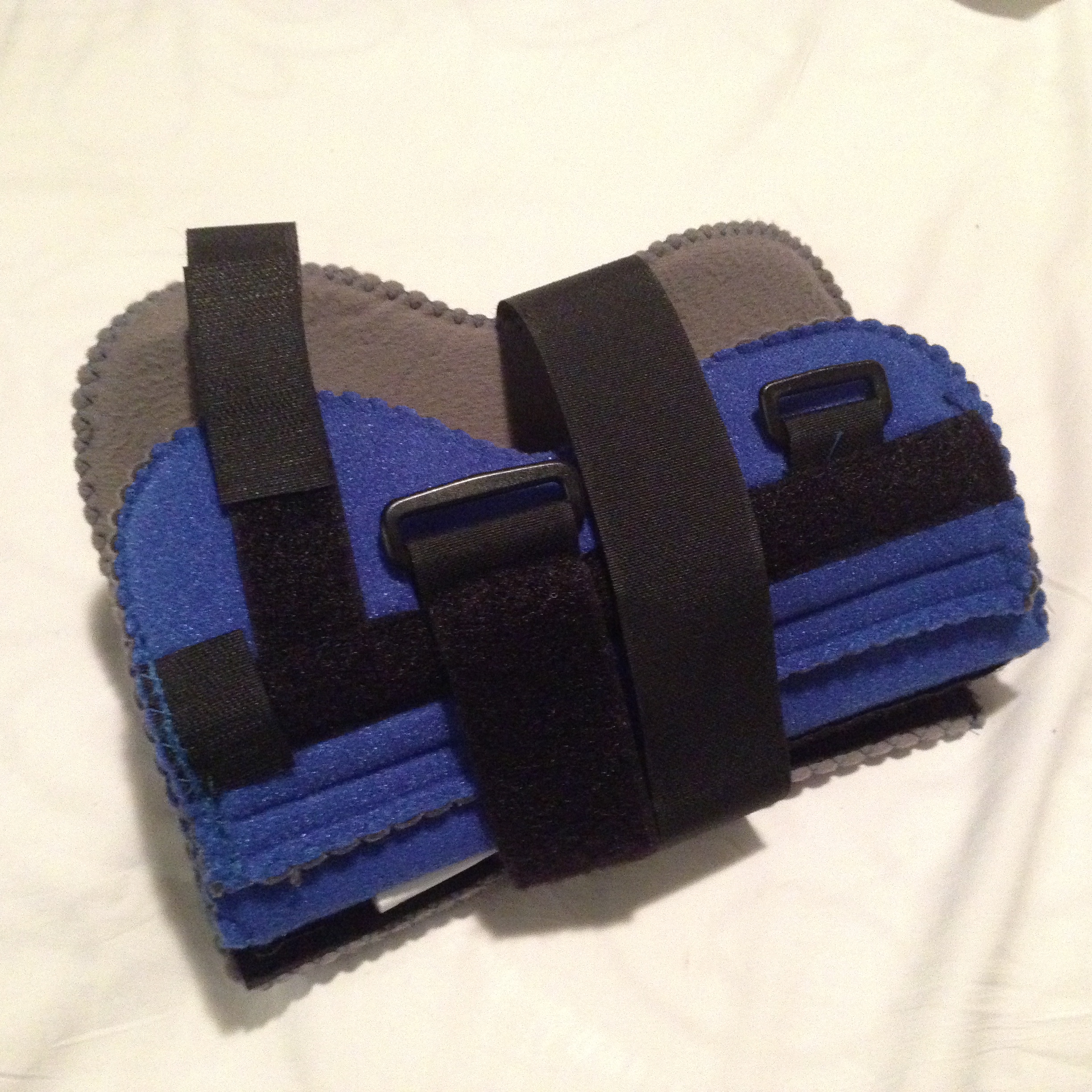 Enora A. started off using a normal walking frame, the type which is pushed along. But it was stressful because we always had to stay behind her in case she fell. So it didn’t make her any more independent!

When she was almost three and half, we tried her with the « Crocodile ». It’s a back to front (posterior) walker which goes behind the child. That makes it a lot safer.

Using a walker this way round also makes it easier for the child to take part in different activities. We added a little flip-up seat (as an extra option) so that Enora can rest if she needs to.

However, seeing as Enora has inherited our Breton stubbornness, we wondered how we would get her to accept a walker… The answer is shown in the pictures: by arousing her curiosity!

A shell seat was designed to keep Enora T. in a good sitting position. To make it more functional, it was fitted with a small tray.

It keeps her sitting up in a correct position and leaves her hands free so she can play and can also position her tongue better while she eats!

Although sitting up like this is good for getting children to use their upper body, they shouldn’t spend the whole day in this type of seat. Leaving your child to play lying down on the floor will encourage their overall motor skills. 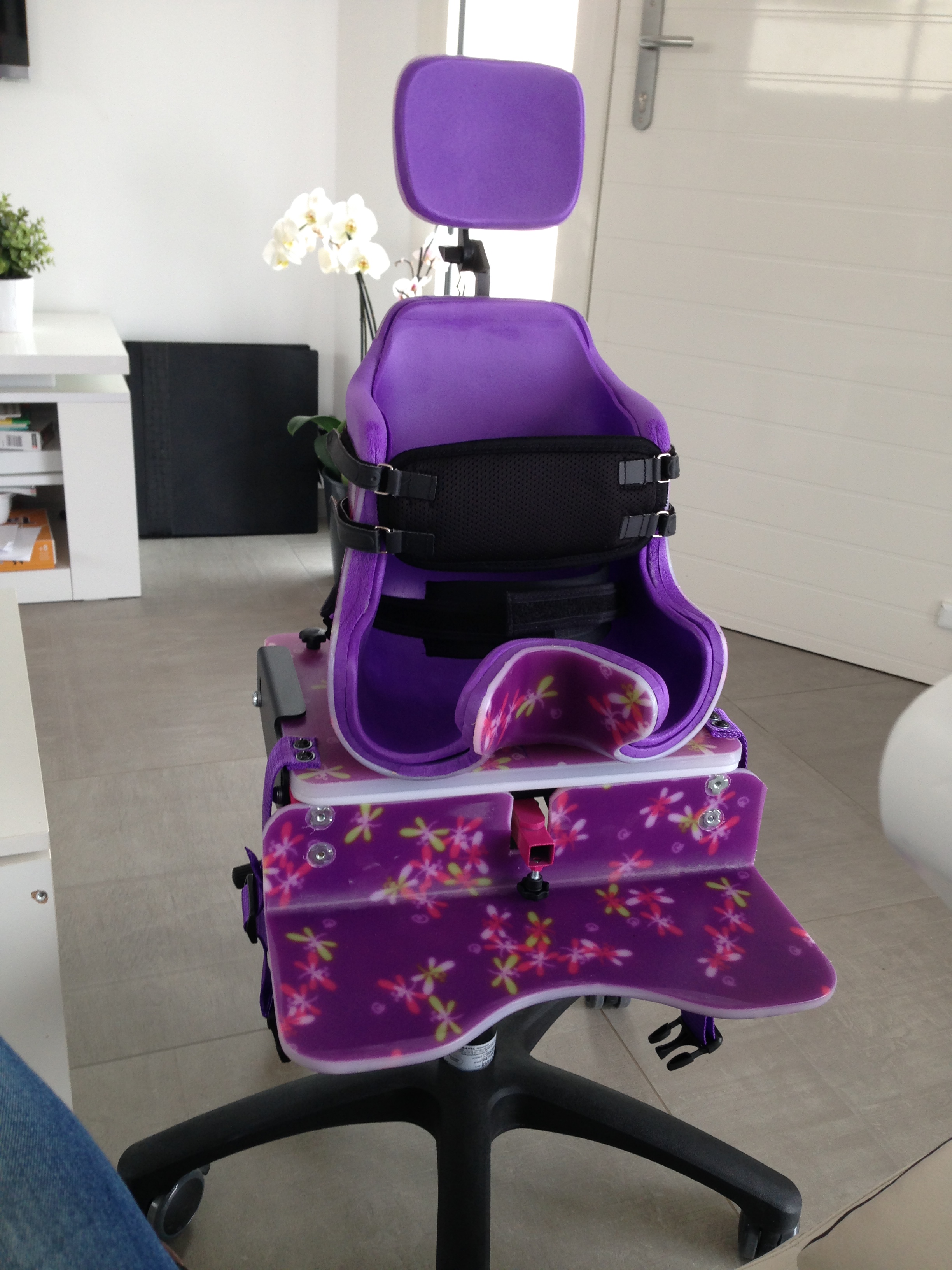 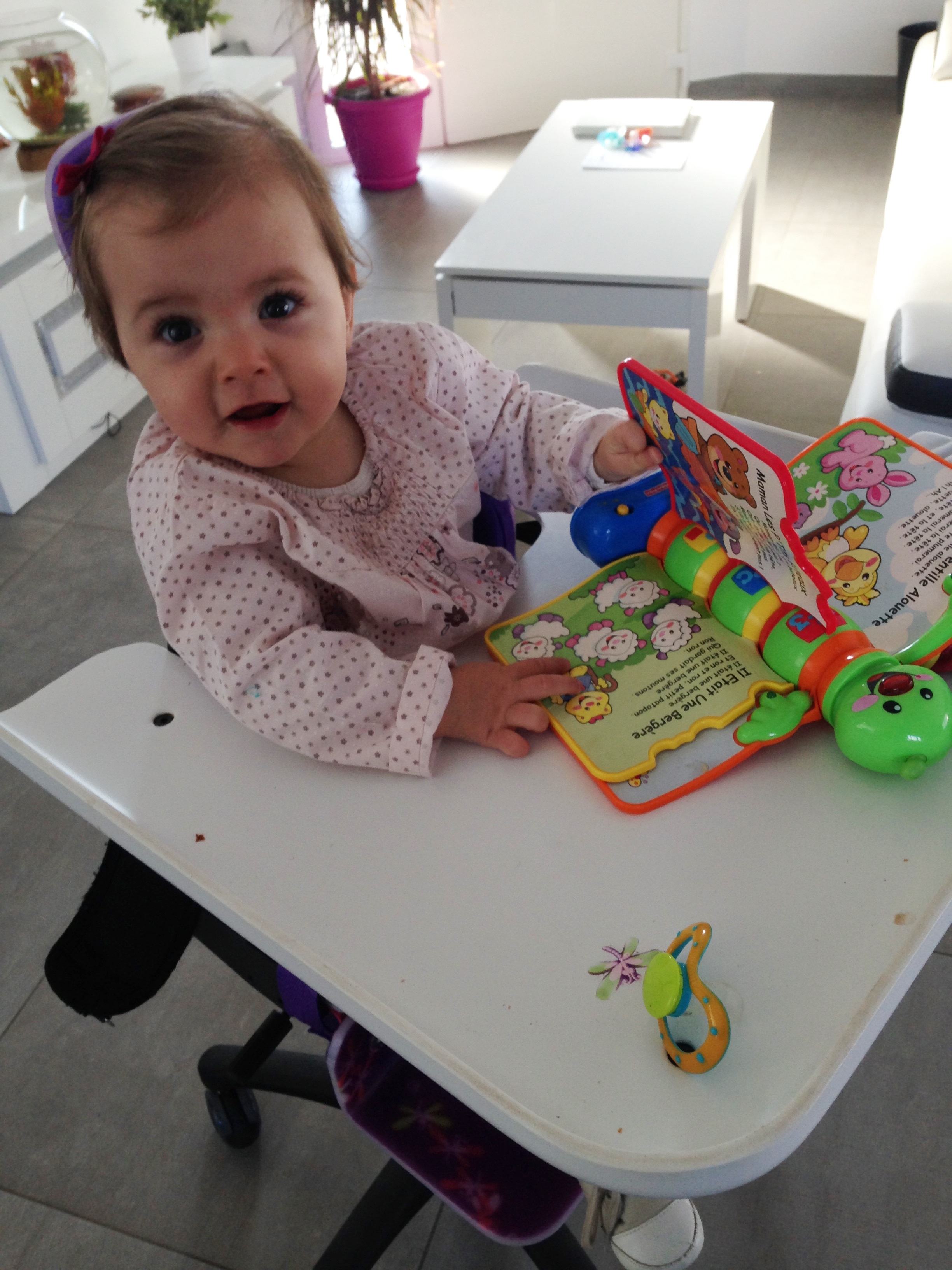 A moulded seat was created to hold Enora A. in a cross-legged / Indian seating position. The spasticity in her legs meant she was not able to seat in this position by herself.

It is very useful for story-telling time in preschool for example. 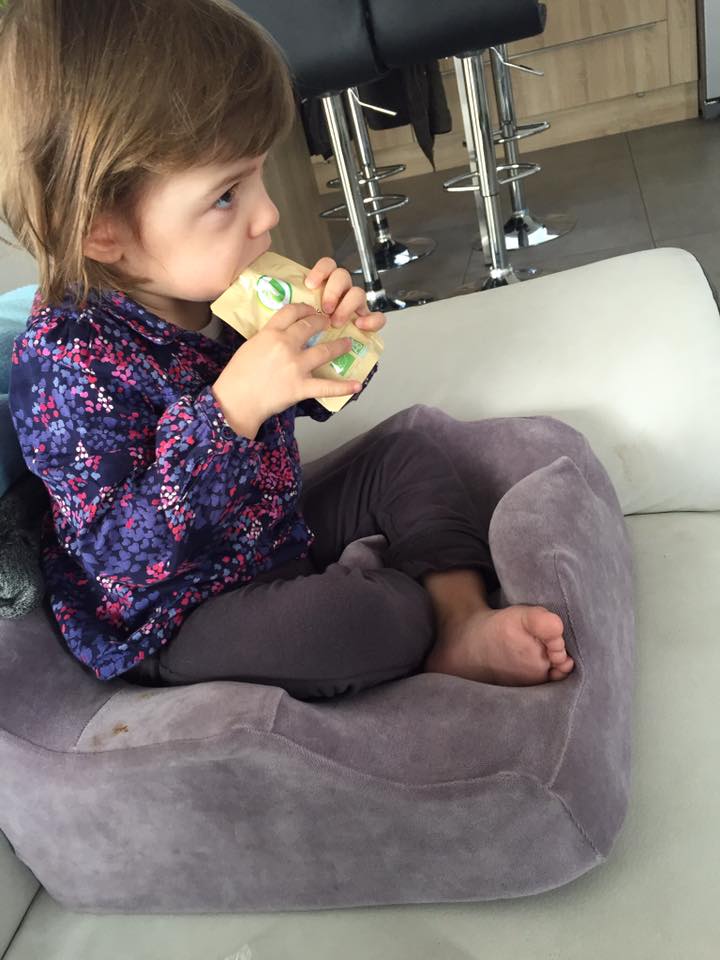 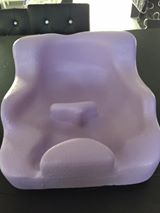 The Motilo is a walking aid which consists of an adjustable corset-seat fitted to a frame with wheels. 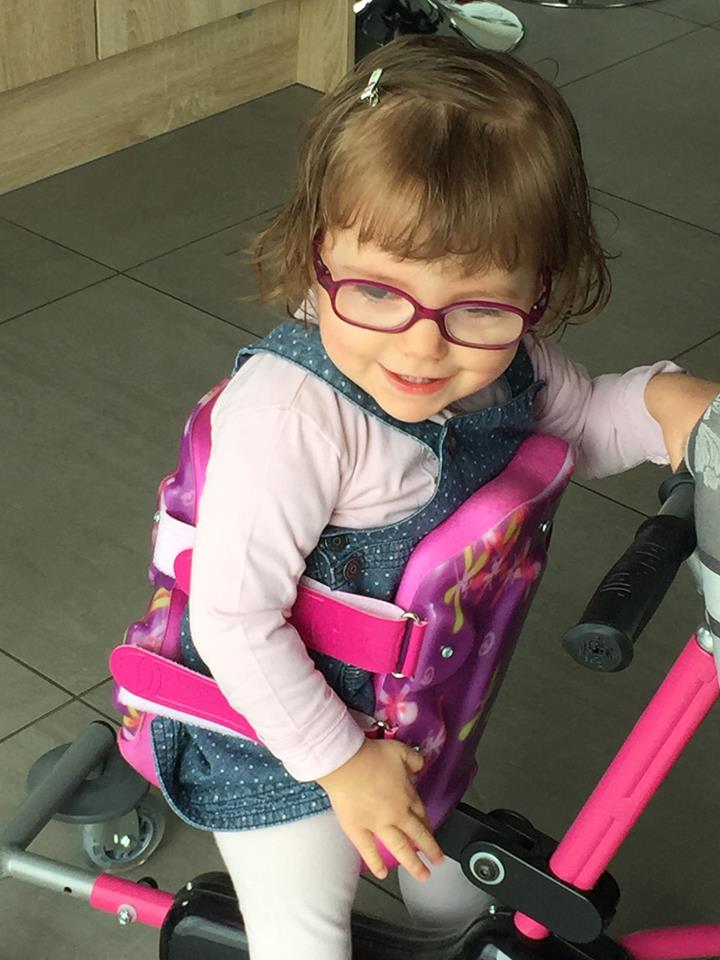 Now, let’s be very clear – while this oversized baby walker allows the child to move around safely, it doesn’t offer any sort of muscle rehabilitation from an orthopaedic point of view. In fact, it actually has two considerable downsides which can be partly overcome:

1. Because the back wheels are not fixed and spin right round, the child places their feet randomly and doesn’t push in a specific direction. The child often scoots around sideways. This was most definitely the case for both Enoras! The way they “walk” is far from good. To fix this, you can fix the back wheels in the axis: children often push on both feet at the same time to begin with, then, very gradually, the fact that the wheels are fixed will help them to dissociate their feet.

2. The support it provides causes the torso to flop. The child’s upper body is passive when they’re in it, and they tend to slump to one side. If you fit the adjustable tray in a high position, the child can lean their forearms on it.

Have a look at this page (in French) to get a better idea: http://www.nouveaux-pas-pour-lucia.org/mon-materiel.php

What we haven’t told you is that Enora A. refuses categorically to use this type of device. She doesn’t see it as a means of empowerment. To be honest, our house isn’t really suitable for this type of apparatus. You need a lot of space, and also the right sort of furniture because the handlebar prevents Enora A. from reaching her toys when she’s in the Motilo. It would be great in a playground though.

As for Enora T., Miss likes trying out standing positions. Imagine the whole new world of potential mischief it opens up! Hey, I can reach the plants, the TV… this is so much fun! However, we ended up swapping her Motilo for a Bison (see description below). 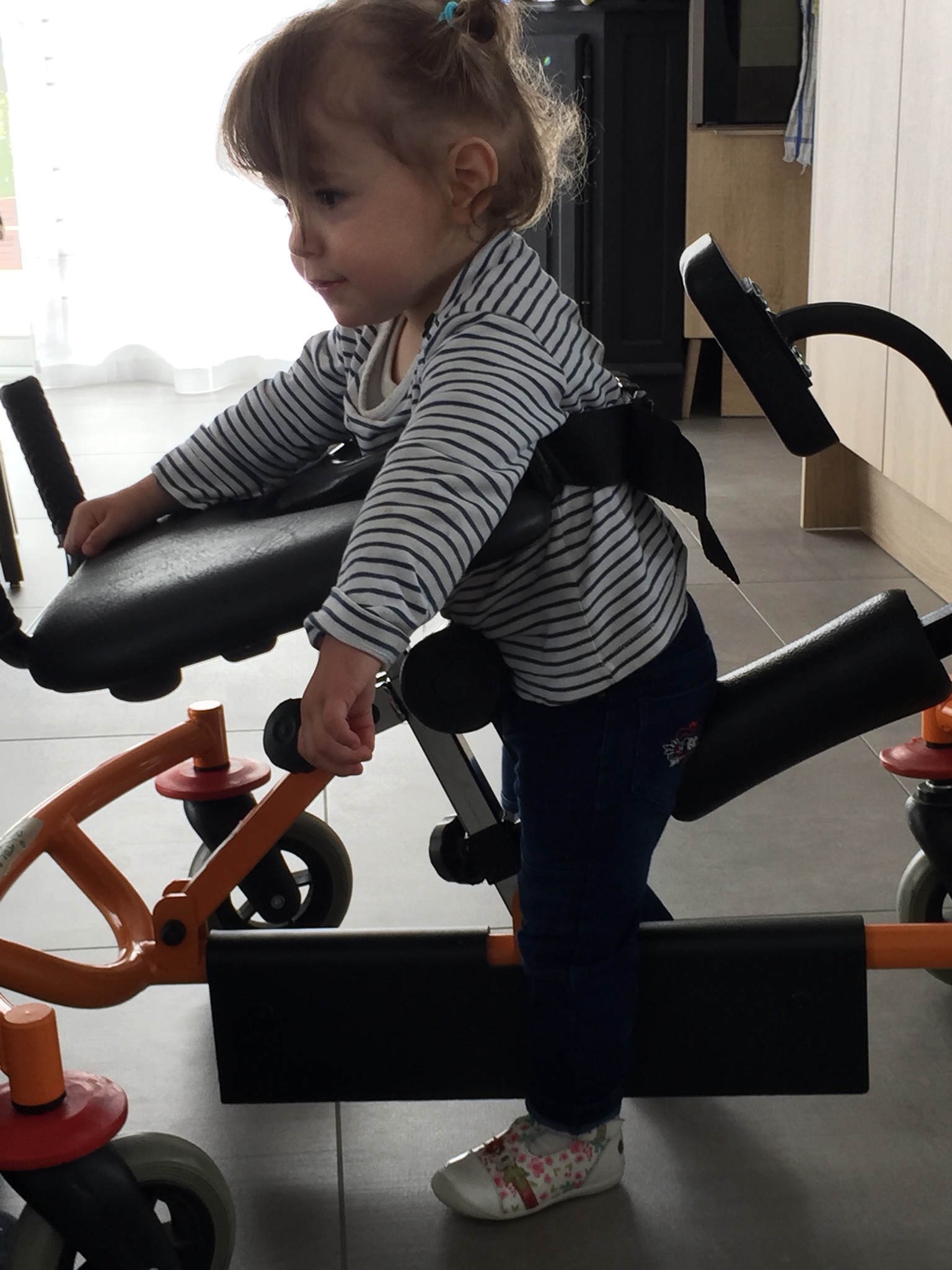 The child doesn’t have any support around them in the Bison. A saddle blocks the pelvis facing forwards.

The child has to press on their elbows in order to hold themselves up and move forwards. Back support has been removed on purpose, to prevent the child from slouching.

The slant incites the child to push forwards.

The Bison works in a similar way to the Votja quadricycle which aims to replicate a crawling motion rather than a « walking » motion.

UHowever, actions speak louder than words – look at how Enora T. managed to walk the first time she tried the Bison! 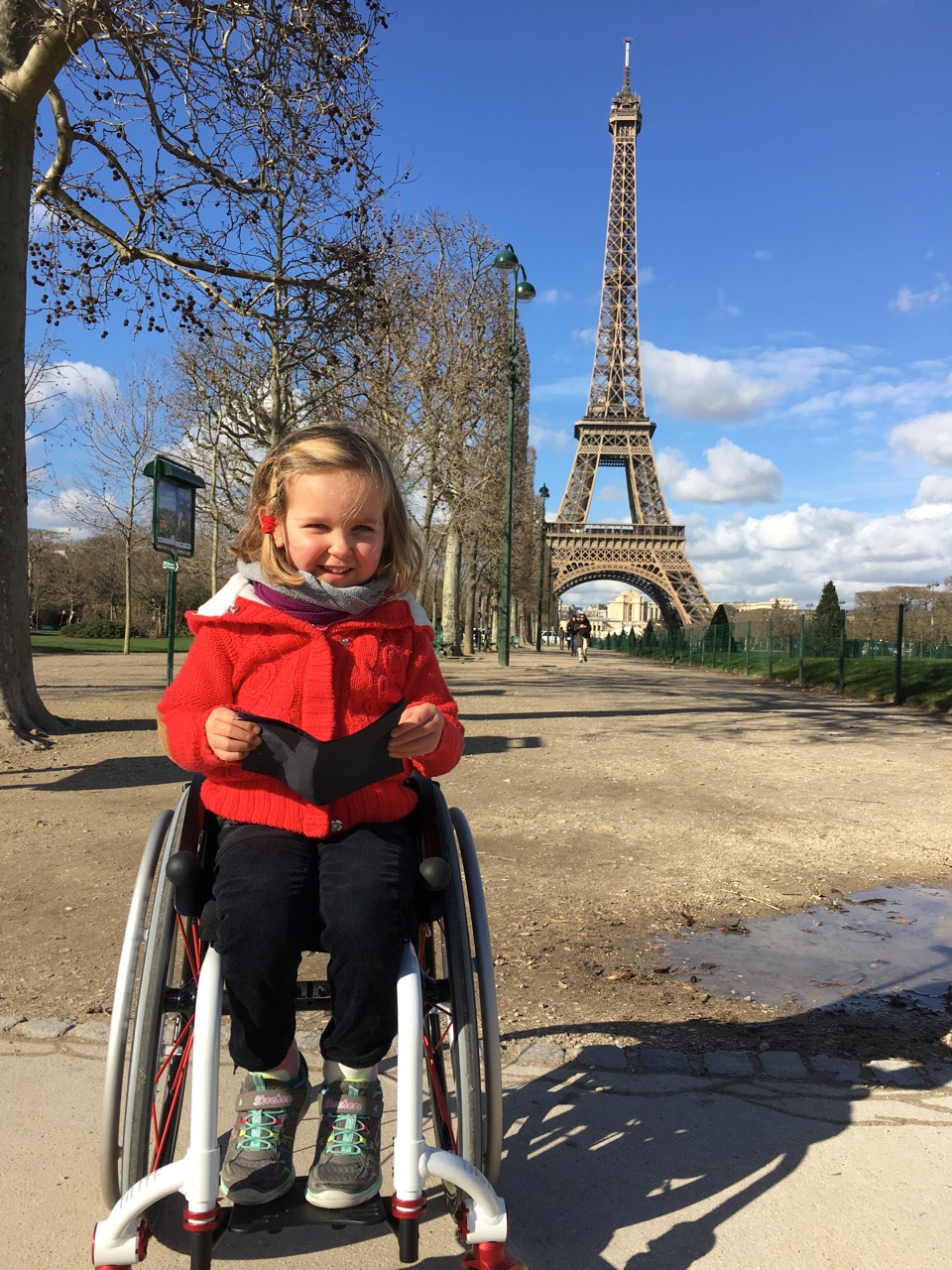 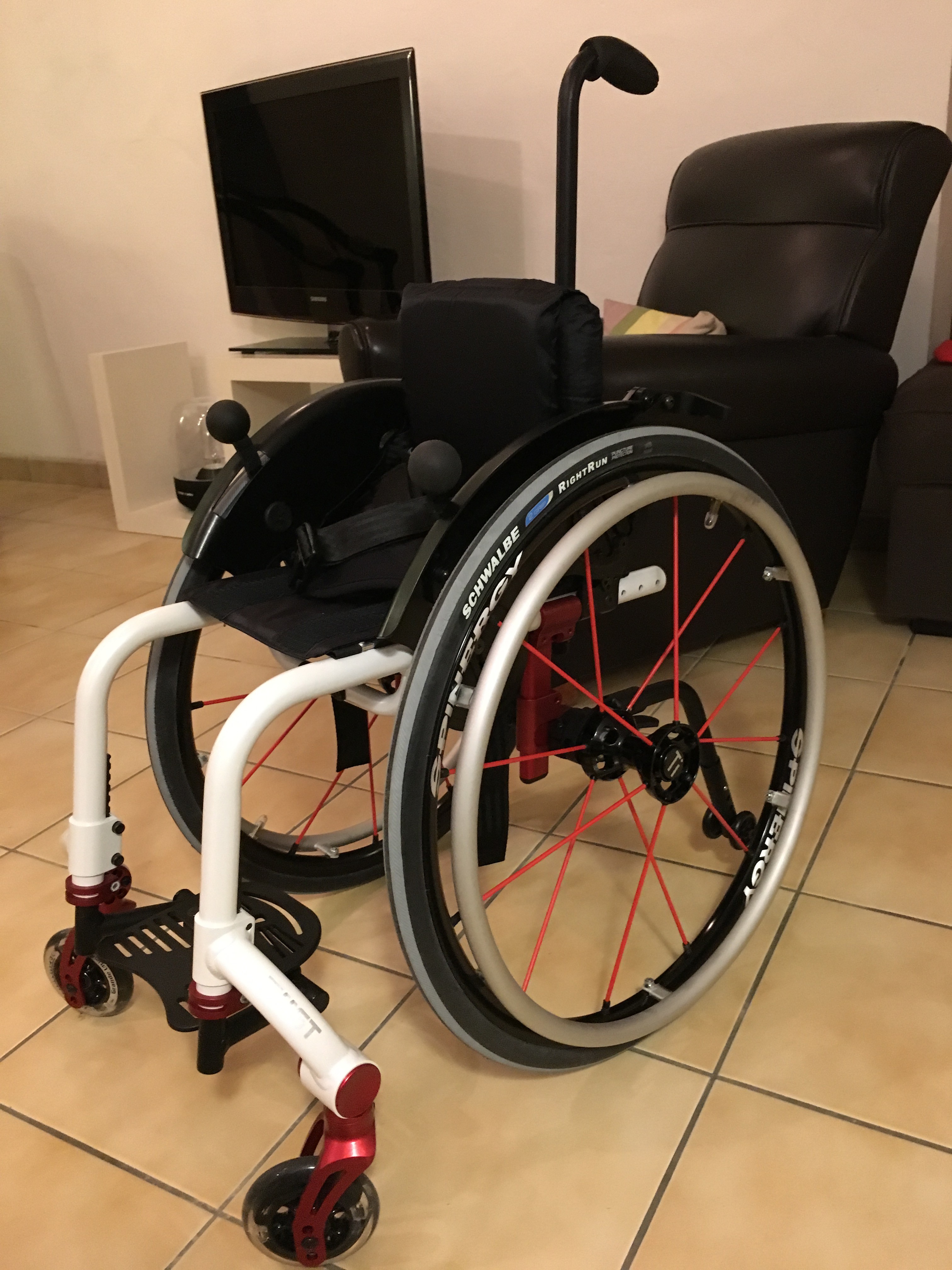 Some parents prefer to use a pushchair / a buggy for as long as possible because they are not ready to use a wheelchair.

Personally, we don’t think it is good for the child’s development for them to be treated like a « baby » in a pushchair when they are more than 3 years’ old. Especially with preschool looming and the way classmates might react.

And anyway, we were fed up with hearing comments such as « How lazy, she should be walking! » from interfering busybodies. No comment…

And there just so happens to be an ultra-light, easy-to-manoeuvre and extremely intuitive little wheelchair which both Enoras got the hang of straight away. And as the icing on the cake, it can also evolve with the child! It is the Twist wheelchair.

More basic wheelchairs cost less, but because they’re so heavy, it’s not easy for children to use them on their own and your back will be begging for mercy every time you have to put it in the boot of the car! 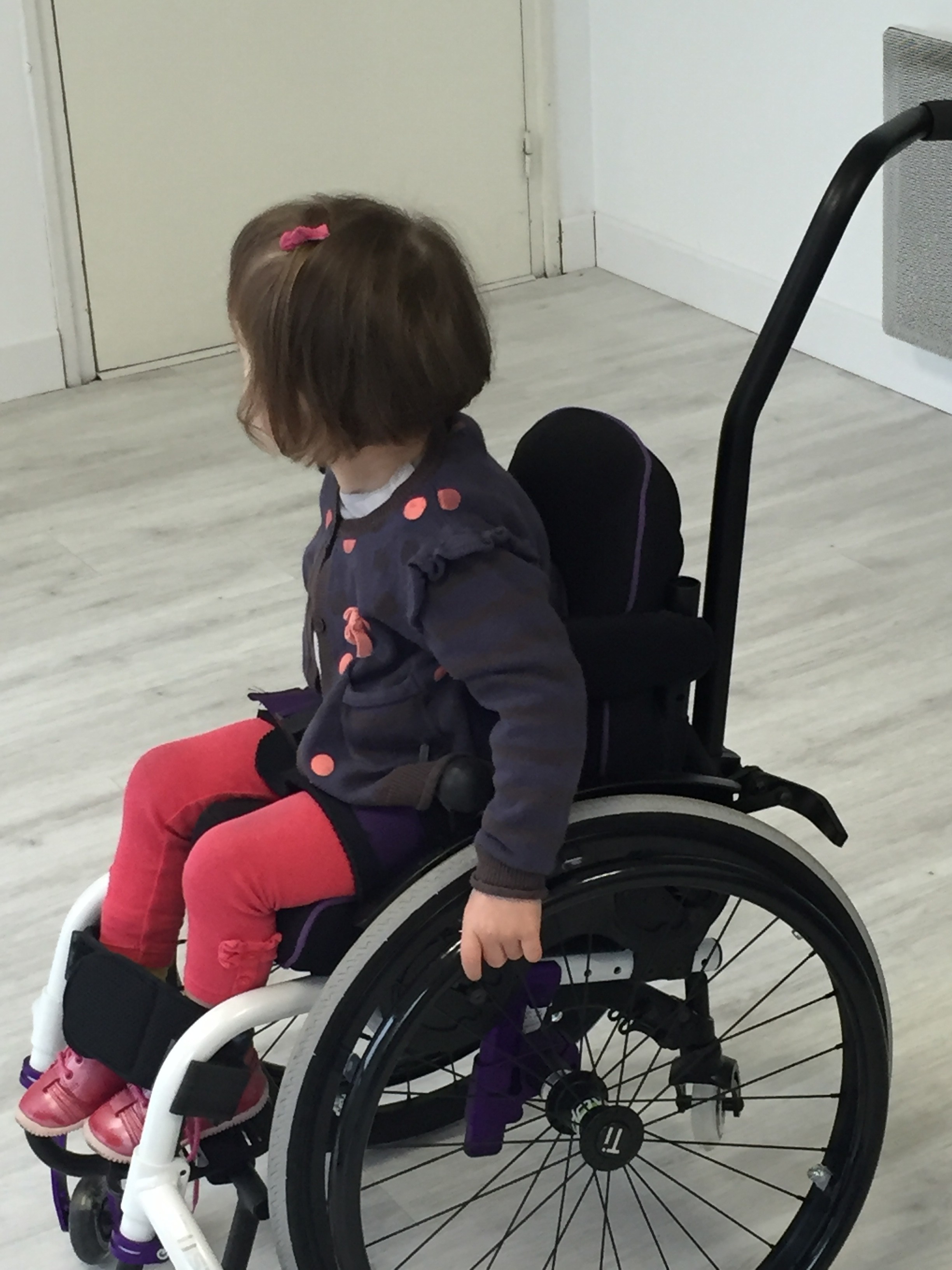 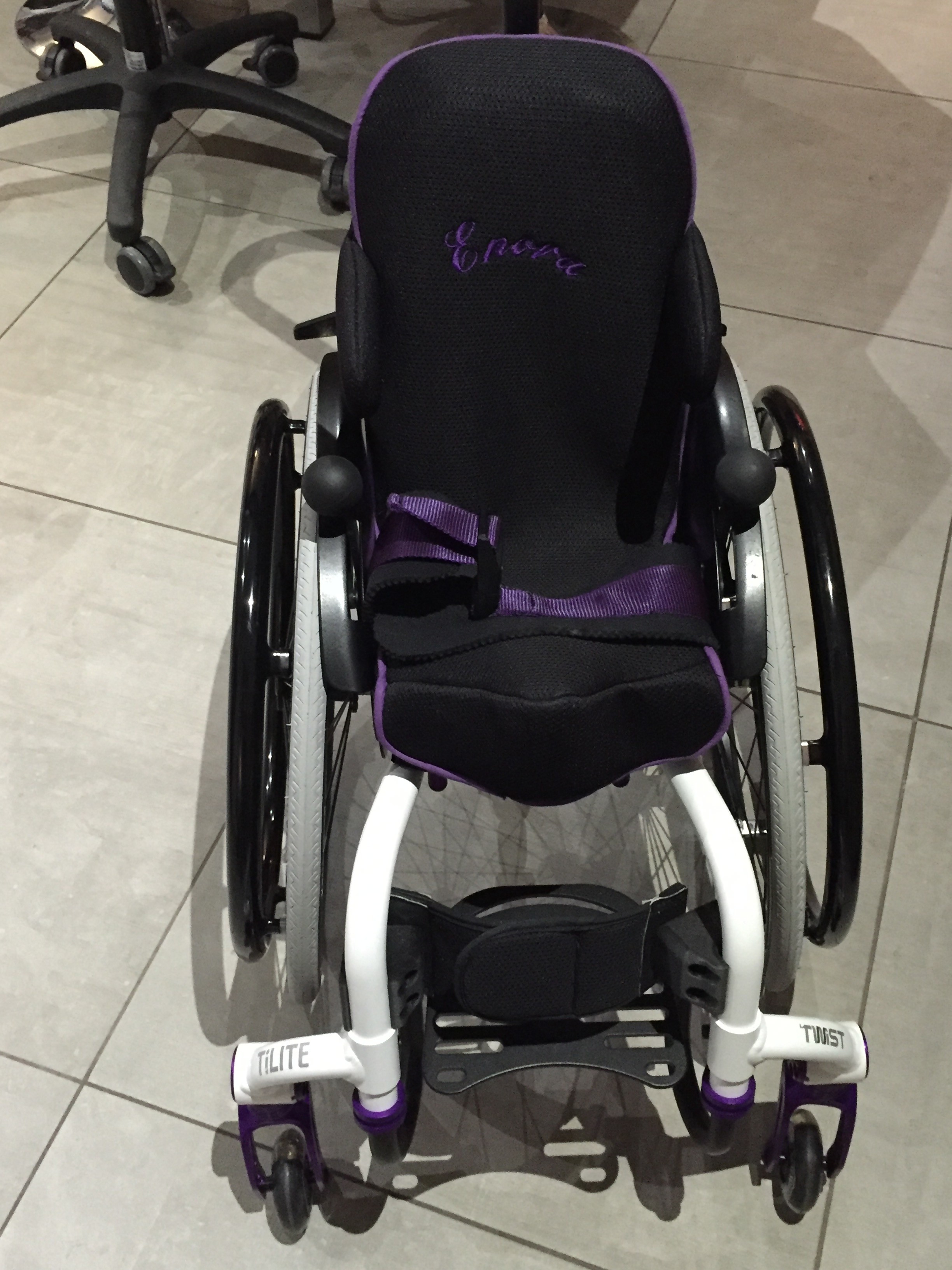 Occupational therapists do not often offer what’s known as « active » wheelchairs. Ask to try one when you are testing different models out!

It makes us so proud to see our little girl zip off to check out the toy aisle when we are doing our shopping! Independence is priceless. Well, actually it does have a price – and that’s the whole problem!

Enora T. uses a modular seat made by “Mathis orthopédie” in Nantes in order to have a good support. It goes without saying that her parents are so glad they turned down the heavy wheelchair fitted with a shell which they were initially offered! 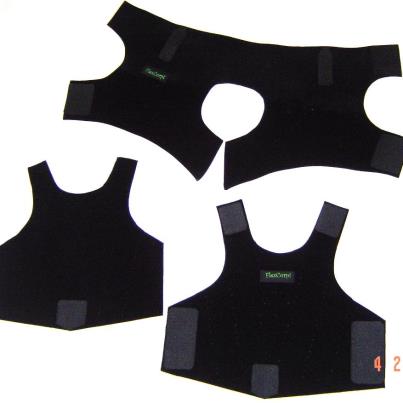 The Flex Corp is a supple and relatively discreet orthosis which helps to improve postural alignment. The Velcro fastenings provide gentle, external support to correct bad postures. This provides comfortable and sensitive correction of the neuromuscular system by facilitating the stability of the torso and joints thanks to a permanent stimulation.

The orthosis consists of two parts; one for the torso and one for the pelvis. For Enora A., only the all-in-one pair of shorts was recommended. The idea was to encourage an external rotation of the knees by acting gently on the adductor muscles, and opening the pelvis by stretching the glutes slightly.

To be honest, we didn’t find this type of device to be particularly effective. A good pair of heel braces were more effective. But maybe using both together might work for some children? 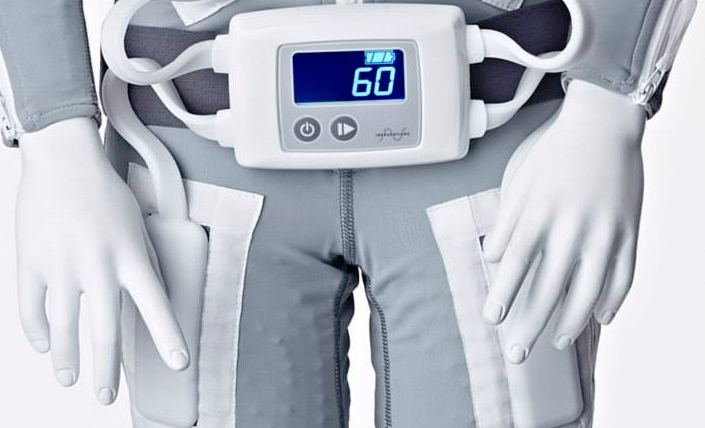 The Mollii suit helps children and adults with cerebral palsy, dystonia, athetosis, or who have suffered a stroke, to REDUCE SPASTICITY via a message which the 58 electrodes sewn into the suit send to the brain to rebalance muscles’ reciprocal inhibition.

NWe haven’t tried this suit ourselves, but a lot of families rave about the freedom of movement it provides while relieving spasticity. So we had to let you know about it!

It was introduced in France by the association « Enfance Handicap Moteur« . As well as providing conductive education, they regularly organise test sessions for the Mollii suit.

And a few other ideas which we haven’t tested but might be worth considering: